This structured tote is the ultimate do-it-all bag that you deserve. It's the perfect carryall for work, travel, and anywhere your day brings you. It features a spacious and organized interior for your essentials, a padded compartment for your laptop, side pockets for your drinks, and you can convert it into a backpack or crossbody.

Crafted from premium American Saffiano leather that's waterproof and scratch-resistant, the Transform Tote will stay just as beautiful through all your travels and adventures.

Does my laptop fit?
The Transform Tote fits all 13" laptops, most 15" laptops, and also 16" MacBook Pros. For more detailed info, see the laptop fit guide below.

Is Saffiano leather soft or firm?
Saffiano is a luxurious leather known for its elegance, structure and durability. This textured leather is highly resistant to stains and scratches, and it is also water resistant. It is sturdy and firm, which means a bag made from Saffiano leather will retain its shape and structure even after years of use, so you'll never have to worry about a floppy bag falling over. Due to its exceptional durability and elegance, Saffiano leather is perfect for making work bags that look professional and can withstand daily use for years to come. We offer free ground shipping on orders over $90 to any destination within the contiguous United States.

For orders under $90, we offer standard ground shipping for $5.

Hawaii and Alaska: We offer shipping via USPS Priority Mail for $8.

We offer discounted flat-rate shipping to 25+ international destinations (from $20 to Canada and from $30 to other countries) via USPS or UPS.

We accept returns of new, unused, unworn, unwashed, and undamaged products within 15 days from the date of delivery of original purchase. Products must be returned in their original condition, including all packaging, hardware protectors, attached hang tags, dust bag, etc.

Warehouse Sale and Final Sale items are not eligible for return, exchange or credit without exception and merchandise is sold as is.

For more shipping and returns info, see our FAQ.

Okay, get ready for a long review, because I want to provide enough info for people who look for the same things I do and are maybe on the fence…

I spent over two weeks trying to find a bag that was functional, professional, and not completely ugly before I finally narrowed it down between the Transform Tote and the Daily Tote.

What made me choose this one? Versatility and materials. I adore the fact this bag has options on how you can wear it for your day, as well as feet on the bottom that keeps it mostly off the floor (heads up, the feet are rubber). I also liked the fact it was actually leather and the company shared the information on where, how, and who makes the bags.

The shoulder straps are the right length, and I love that there is a piece to connect the two together, so that one doesn’t flop off your shoulder. This isn’t a snap though, it is a push through piece of metal. The only issue is that these cannot tuck in when wearing it as a backpack. I have flipped them to face against my back when wearing it as a backpack with the detachable straps hooked over to keep them in place, and they look decent like that. I was a bit concerned to just leave them flop in front in case someone grabs them and tries to pull me or pull the bag off when walking.

The only thing that I was on the fence about when I purchased this bag was the fact that it did not have something to secure it to a luggage handle - but, when the bag showed up, there was an information card included that showed how to use the detachable straps and loops at the bottom of the bag to assist in securing it to the luggage handle. I would actually suggest the company put a photo of this functionality on the website, since it almost made me not buy the bag. I also really like the magnetic clasp that holds the laptop in. I hate the Velcro normally seen in laptop bags, so this was a definite benefit. Like other people mention, the laptop sleeve is definitely large, but I don’t see that as an issue.

So, some other comments about the bag and shipping.

First, the box arrived damaged (and took three weeks to arrive, which was expected). One corner of the box was completely smashed and ripped. Luckily, the bag inside was well packaged in packing material and further in plastic to prevent moisture. Since the bag itself is fine, this was not a huge deal (and, would have been the shipping company’s fault anyways). Also, you don’t need to download the Shop app to track your package. They do email you with the information.

Second, I ordered this on warehouse clearance (which, I love that the company does this for bags not quite up to standard). I purchased this in black, since I expected to be going through airports and did not want to chance marks showing up on lighter material. The imperfections on it are minimal and exactly as described in the clearance description. The material flaws in the leather are only visible in certain lighting and the zipper not being as smooth isn’t a big deal. If you use both hands (one to zip and one to hold it straight, there is no problem.

Third, while I absolutely adore the versatility, the detachable straps are still almost too long at their shortest when wearing as a backpack. I’m not short (5’9”), and the bag sits close to the back at the bottom with a gap at the top. I can see this being a pain point when the bag is full, as the weight will be distributed poorly. Still, this is better than carrying it just on one shoulder.

Forth, again with the detachable straps. When I tested the backpack straps, the first thing I noticed was that the loops on the straps were getting twisted and turning where they double over to shorten. So, every time I go to put it on as a backpack, I need to adjust each strap to make sure they are smooth. This would probably be corrected with a heavier fabric for the straps or some sort of loop to keep them from twisting.

Fifth, I was kind of sad this didn’t come with or include the option for a dust bag. Not a deal breaker, but just a FYI.

Sixth, the metal loops do not stay flush against the bag when the detachable straps are removed. So, you may need to adjust them back against the bag when wearing. I don’t see a problem with this for me, as they are very unobtrusive. I do know some people who may be irritated with this, so needed to mention.

Seventh, the liner is light, both in weight and in color. I like both of these factors, though there can be downsides. First, though a heavier fabric may keep the liner pocket sturdier, it would increase the weight of the bag. Second, though the lighter fabric may be easier to stain, you can see everything very well inside because it is so light - no black hole that you lose stuff in.

Overall, without having a chance to test out the bag yet through an airport, I don’t regret the purchase. It seems very sturdy and looks professional. The downsides I mentioned are more personal opinion than actually something that I...

A
Anonymous
Perfect bag for work

This bag is perfect for work. It holds all of my essentials. I did purchase a bag organizer from amazon for more storage and to keep the inside clean because the lining is a light tan color. The crossbody strap comes in handy in the moment you have to be hands free. I also really like the laptop holder but I use it mostly for documents and folders. My favorite part of the bag is the front zipper pocket. I am able to store my concealed handgun in the pocket holder along with 2 magazines and they stay in place. I have the compact Sig Sauer P365. I don’t have to add a bulky purse holster. So for you ladies that need a concealed carry purse for work, this bag is a great option.

Better quality & better thought out design to make life on the go easier ( I use this bag for law school)!! This bag is actually better than other brands that go for the same price!! (Dagne Dover). I had to get this bag in Stone/cream color because I had just gotten a black Tote for my birthday, but I will be saving money to buy this bag in black! It’s a perfect bag for every occasion!

This is the best tote of my life. I got it for work. The selling point for me was the many pockets and the outside ones easy for keys a mask and other things you need to access conveniently. I also carry a water bottle and coffee cup to work so the outside pockets perfectly fit those. The material is such good quality and my laptop fits. Its honestly just my best purchase. I love it so much. 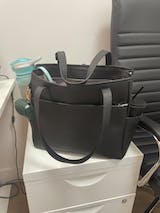 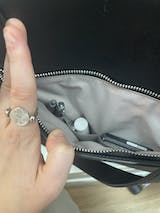 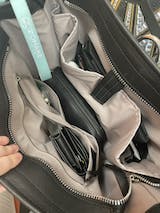 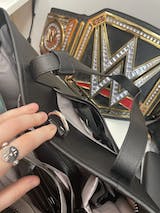 I am called a 'bag lady'. I have a laptop backpack, a purse, a lunch bag and sometimes an additional bag if I need to bring stuff to work that won't fit in any of those. I also have a 3 year old so on the weekend I sometimes need a purse and a diaper bag. Now I have e consolidated my work backpack and my purse and on the weekend I can take my laptop out and put my son's change of clothes or other items in the bag so I don't have e to carry so many bags. I ha e been trying to find a bag for years that I could consolidate but that looked nice too. I think I finally found it!

Created from premium American Saffiano leather that's waterproof and scratch resistant, this structured tote will stay just as beautiful through all your travels and adventures.

Wear It Your Way

We created the Transform Tote to be your go-to bag that you can take everywhere - wear it on the shoulder, as a backpack, crossbody, or in your hand.

Store your laptop (fits all 13" and standard 15" laptops) or tablet in the padded laptop compartment, because you never know when inspiration strikes.

A roomy interior with smartly placed pockets to help you stay organized throughout your day.

Getting through the airport just got a little easier. The shoulder straps can be easily converted to luggage straps with the built-in connector.

Packed with thoughtful details that make your day easier - featuring side pockets for your drinks, a zippered front compartment for your essentials, and an easy-access rear slip pocket for your smartphone, parking ticket, key cards, and etc.